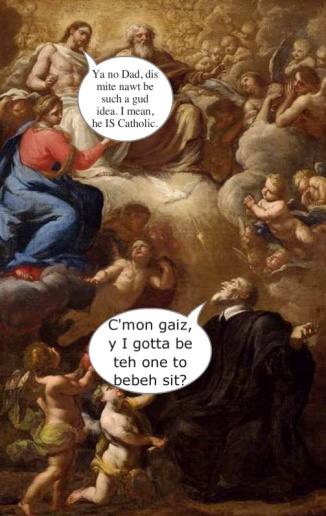 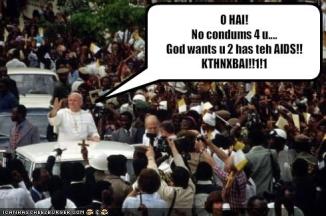 Image source here, for those of you saying WTF.

Hey, we gotta get more mileage out of the Palin toast… 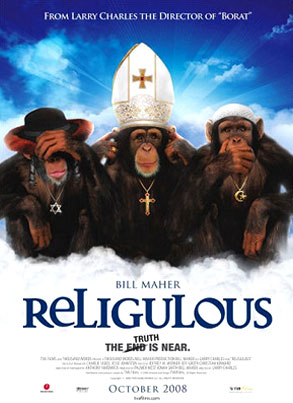 Opening today is Bill Maher’s comic take on religion, Religulous. While I would rather be running a banner ad for it instead of Muslim Singles Dating, alas we can not. Ah well, still, chances are if you like this site, you’ll like the movie and it offers me a chance to post the far superior movie poster used outside the United States.. Hell, I might even go see it, and I think the last movie I remember seeing in a theater was Kung Fu Hustle.

*Ok, I just had to slip some form of shameless advertisement in, just on principle. 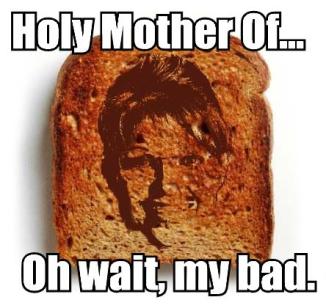 Apparently, the virgin is continuing her world tour, this time stopping in Boston. Just remember. These people vote.

Oh hey, while you’re out. If you see the image of a Platypus in the window or on toast, can you let us know? Thanks. 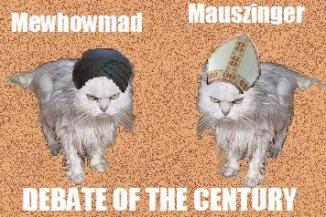 What do you think of pope cat? I thought this up the other day while reading Pharyngula.

One of the staples in my life is listening to the Rick Emerson Show, a radio show potpourri that’s rather hard to explain, but suffice it to say I find it really amusing. (After all, the show often has a “Religious Nutcase Watch”). Anyway, the host is a recovering catholic, and discovered a “Stations of the Cross” booklet thing he was indoctrinated to make in kindergarten. He was discussing it on the show today, and had me on the floor laughing. Visual aid on his website… While I would humbly suggest it’s worth your time to try the whole show, I’ve listed the MP3s below with their time to start listening to the relevant sections.

Oh, as a bonus, there’s also a Religious Nutcase Watch for your pleasure since you’ll already have hour 3.
Rick Emerson Hour 3 – From 17:22 through 19:30.

You can find the Rick Emerson Show RSS/Podcast feed available for your favorite player. Four hours a day, 11-3. The show is out of Portland, Oregon, but not living there, I listen to it on the net.